If someone is severely injured or suffers from chronic pain or certain diseases they might be prescribed an opioid of some sort by their doctor. The problem with opioids is that they are highly addictive. Sometimes they serve as gateway drugs to other narcotics, too. New research has surfaced showing that a lot of states with legal medical marijuana had less fatal car accidents with people who had opioids in their system involved. Read more about the study in the article below.

Marijuana May Alleviate America’s Opioid Crisis, New Study Suggests
In 2014, more than 14,000 people ― nearly 40 per day ― died from overdoses of prescribed opiates.
Access to medical marijuana may be cutting down on the overall use of opioids, including prescription painkillers like OxyContin and Percocet, new research suggests.

In a study, researchers from Columbia University’s Mailman School of Public Health analyzed traffic fatality data from 1999-2013 for 18 U.S states. They found that most states that passed medical marijuana laws saw an overall reduction in fatal crashes involving drivers who tested positive for opioids.

“We would expect the adverse consequences of opioid use to decrease over time in states where medical marijuana use is legal, as individuals substitute marijuana for opioids in the treatment of severe or chronic pain,” lead author June H. Kim, a doctoral student at Mailman, said in a statement.

The study, published Thursday in the American Journal of Public Health, is among the first to look at the link between state medical marijuana laws and opioid use. Medical marijuana laws, the authors concluded, are “associated with reductions in opioid positivity among 21- to 40-year-old fatally injured drivers and may reduce opioid use and overdose.” 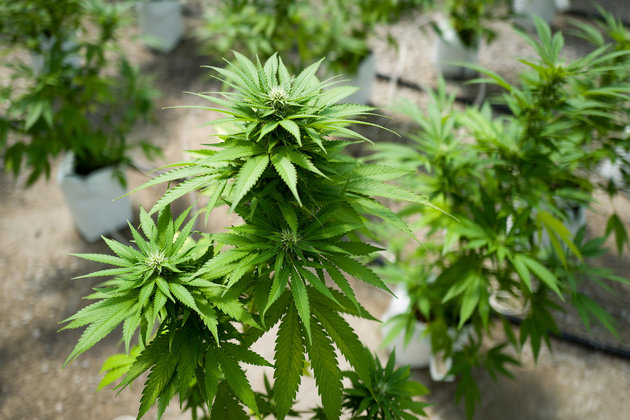 JOHNSTOWN, NY – AUGUST 19: Cannabis plants grow in the greenhouse at Vireo Health’s medical marijuana cultivation facility, August 19, 2016 in Johnstown, New York. New York state lawmakers voted to legalize marijuana for medical use in 2014 and the law took effect in January 2016. Currently, five organizations are allowed to grow and sell the drug for medical use in the state. New York’s new law only allows people with ‘severe debilitating or life threatening conditions’ to obtain marijuana for medical use. (Photo by Drew Angerer/Getty Images)

The United States is currently facing an epidemic of opioid painkiller abuse. Since 1999, opioid prescriptions and sales have quadrupled in the United States, a boom that the CDC said has “helped create and fuel” the current opioid abuse crisis. In 2014 alone, more than 14,000 people ― nearly 40 per day ― died from overdoses of prescribed opiates.

The Columbia study adds to a growing body of evidence showing cannabis can be an effective, alternative treatment for pain relief.

But the Drug Enforcement Administration has stopped short of embracing alternative painkillers, recently declining to loosen restrictions on marijuana and announcing plans to criminalize kratom, an herbal supplement that many say is effective at treating chronic pain and fighting opioid addiction.

At the state level, however, the tide is turning. Twenty-five U.S. states have legalized medical marijuana. Four of those, plus the District of Columbia, have also legalized recreational use of the substance.

“As states with these laws move toward legalizing marijuana more broadly for recreational purposes, future studies are needed to assess the impact these laws may have on opioid use,” Kim said in a statement.

« Meditation and Yoga for Injuries
If You Aren’t Already Meditating… »